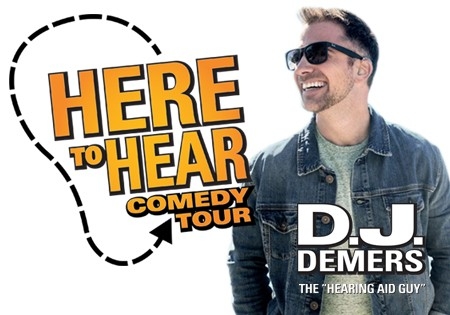 Warrenville (IL, US), September 13, 2017 – Phonak, the leading global provider of hearing aids and wireless communications solutions, along with award-winning comedian D.J. Demers (featured on America’s Got Talent, Conan) are teaming up for the ‘Here to Hear’ comedy tour — a month-long road trip to shatter stigmas and raise awareness about hearing loss through the power of laughter. From California to New York, D.J. will travel to colleges and universities across the country performing stand-up shows at no cost to students. The comedy tour takes place throughout the month of October to coincide with National Disability Employment Awareness Month.

The marathon road trip also aims to raise awareness of the latest hearing technology available to students with hearing loss. According to a 2011 study by the International Journal of Audiology, seven percent of college students are in need of hearing aids, but are unaware of the various hearing technology available to them. Hearing accessibility accommodations such as Phonak Roger Technology are guaranteed to eligible university students at no cost by federal law, in compliance with Section 504 of Rehabilitation Act of 1973 & Americans with Disabilities Act of 1990.

D.J., who is known as “The Hearing Aid Guy,” has worn hearing devices since he was four years old and is a strong advocate for people who wear hearing aids — often using the stage to raise awareness. He currently wears Phonak Naída V90-UP hearing aids, and uses the Phonak ComPilot and Phonak Roger Pen daily.

“As I’ve gotten older (and dare I say wiser?) I’ve begun to acknowledge that my hearing aids are a huge part of my identity,” says D.J. “I still believe that I am more than my hearing aids, but I’m not ashamed to fully recognize their role in my life.”

Students in attendance will learn how they can access hearing technology like the Phonak Roger Pen through their student disability services office. Anyone who can’t see D.J. in person will be able to tune in for the laughs online. Daily vlogs will be aired on YouTube, on and fans can also join in on Instagram and other social media using the hashtag #HereToHearTour.

D.J. Demers is an award-winning stand-up comedian. He appeared on season 11 of America's Got Talent, has performed stand-up on Conan twice, and was the winner of the 2014 Homegrown Comics Competition at the prestigious Just For Laughs festival in Montreal. After winning the competition, D.J. was invited to perform at a TV taping, the first time that has happened in festival history. D.J. was also a featured performer at Toronto's JFL42 comedy festival in 2014, the winner of the 2013 Toronto Comedy Brawl, was a finalist in NBC's Stand-up for Diversity, and won 'Best Breakout Artist' at the 2015 Canadian Comedy Awards. He has also worn behind-the-ear hearing aids in both ears since he was four years old.

Press Release: Phonak to release a game-changing Bluetooth hearing aid that connects directly to any cell phone* and TV, based on a revolutionary new chip technology

In 2017, Phonak, a member of the Sonova Group, proudly celebrates its 70th anniversary.

Headquartered near Zurich, Switzerland, Phonak was born in 1947 out of a passion for taking on the most difficult hearing challenges. Seventy years later, this passion remains. As the industry’s leading provider, we offer the broadest portfolio of life-changing hearing solutions. From pediatric to profound hearing loss, we remain committed to creating hearing solutions that change people’s lives to thrive socially and emotionally. We believe in creating a world where ‘Life is on’ for everyone.

At Phonak, we believe that hearing well is essential to living life to the fullest. For 70 years, we’ve remained true to our mission, creating life-changing hearing solutions to help people thrive socially and emotionally. Life is on.