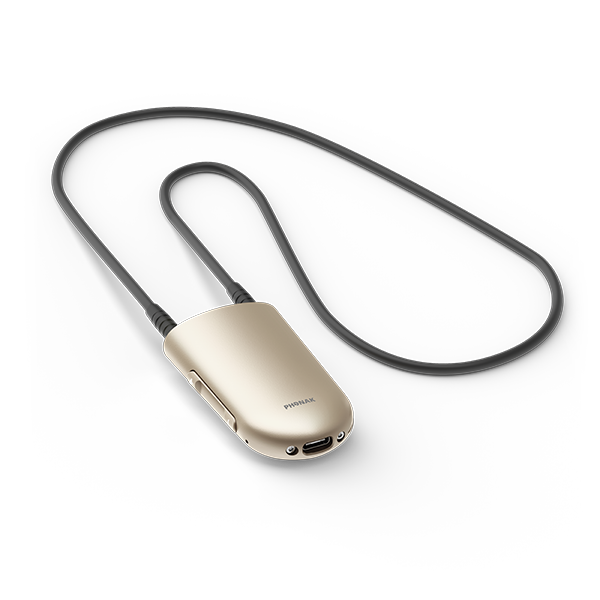 Q: When should I chose the Roger NeckLoop receiver?

A: When you have a hearing device with a T-coil and want to get access to the Roger performance.

Q: What can I do to improve understanding using Roger NeckLoop?

A: Make sure the volume of Roger NeckLoop is as loud as possible without being distorted. This is usually a few steps below full volume. Lower levels will decrease the signal-to-noise ratio.

A: Roger NeckLoop is designed for indoor use and should be protected against water. If Roger NeckLoop gets exposed to water, switch it off and dry it with a dry cloth.

Q: How is Roger NeckLoop different from Roger MyLink?

Q: What is included in the box?

Q: Can Roger NeckLoop be worn underneath clothes?

A: Yes, it is fine to wear Roger NeckLoop underneath clothes. Do keep in mind that metal objects such as zippers and jewelry can affect the Roger reception.

Q: Is there any way to adjust the length of the neck loop cable? It’s far too long for me.

A: Besides using the shorter cable that is available, you can also try gathering up a section of the loop with a e.g., a hair tie. Do not make any knots or sharp kinks on the neck loop cable as it might damage it.

Q: Is there a risk of strangulation when wearing Roger NeckLoop?

A: You should always be careful when wearing things around your neck. However, Roger NeckLoop is designed in such a way the neck loop cable will detach before it is pulled by any amount of force that could be dangerous.

Q: How long does a fully charged battery last?

A: Usually, the battery last for 10 hours.

Q: Which hearing devices are compatible with the Roger NeckLoop?

A: All hearing aids, cochlear implant and BAHA sound processors that have a T-coil are compatible with Roger NeckLoop.

Q: What is the difference between the 02 and 03 version?

Q: How do I pair Roger NeckLoop with a Roger microphone?

A: Switch on both devices and hold them close together, then press the Connect button on the microphone.

Q: How can I use the USB audio interface in Roger NeckLoop?

A: The USB audio interface makes it possible to use a Roger microphone as input for e.g., speech-to-text or online meeting applications on a computer or smartphone that supports USB audio devices.

Roger NeckLoop is USB class compliant and will identify itself as a USB audio device when connected to a computer, or a smartphone with USB On-The-Go capabilities. No additional drivers should be necessary.

Q: What equipment do I need to use the USB audio interface?

A: Computers only need to have a free USB port. You can use the supplied USB cable to connect Roger NeckLoop to the computer.

When using smartphone, it is often necessary to use a so-called USB OTG (On-The-Go) adapter that converts the charger socket to a USB input. The supplied USB cable can then be used to connect Roger NeckLoop to the smartphone. Alternatively, you can use a USB C to USB C cable.

IPhones and iPads will require a Lightning to USB 3 Camera Adapter or equivalent, with a connected power source, as they otherwise cannot supply enough current to charge Roger NeckLoop.

Q: My smart device does not recognize Roger NeckLoop as an audio device. What can I do?

A: For Android smartphones, make sure USB OTG is enabled in the settings menu. It is typically inactivated by default.

Q: What audio input formats are supported by the Roger NeckLoop USB port?

Q: If the headphone output is used for demoing Roger NeckLoop, how is the sound quality compared to Roger MyLink?

A: Roger NeckLoop has a considerably lower level of internal noise.

Apple, iPhone and iPad are trademarks of Apple Inc., registered in the US and other countries.
Android is a trademark of Google LLC.