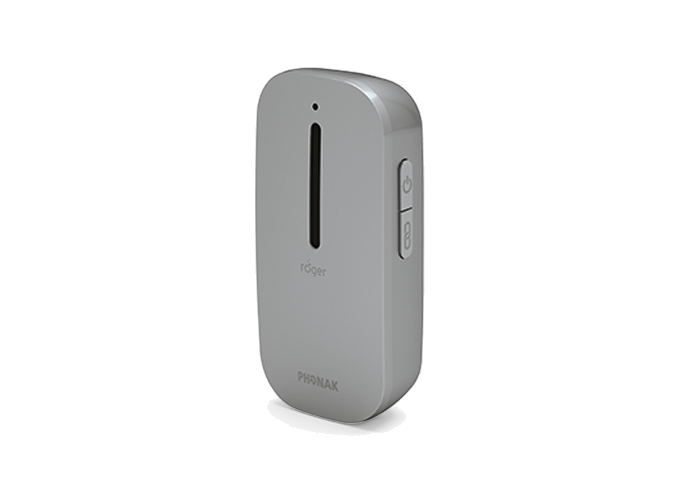 A: Yes. With three categories of Roger receivers available, there is a solution for virtually every listener, regardless of the hearing technology your client uses.

You can also use our Roger Configurator tool (English only) to match hearing aids/CIs with the right Roger receivers.

Q: What is the difference of Roger Clip-On Mic compared to the Roger Pen/Roger EasyPen?

A: The Roger Clip-On Mic is dedicated for a single conversation partner, whereas Roger Pen and Roger EasyPen are made for listening to multiple speakers and cover more use cases.

Q: What is the operating range of Roger Clip-On Mic?

A: The typical operating range is 10 meters / 33 feet. If the Roger microphone and receivers are in direct line of sight, then the range may be up to 20 meters / 66ft.*

*Range may be impacted by the 2.4GHz technology, which cannot travel through human bodies or other obstacles.

Q: When my customer uses a Roger system, are other people able to ‘listen in’ on his conversation?

A: No, the transmission is secure. Only receievrs connected to the Roger microphone can receive the signal.

Q: What should a customer do to understand better in a noisy environment with a Roger microphone?

Q: How can the volume of the Roger signal be adjusted when watching TV?

Note: If the customer has a separate TV-box, it is recommended that they should connect the docking station to this box’s audio output. This way the customer can set the volume of the TV-box (the Roger signal you hear) to one level, but the TV’s normal output (via its speakers) to another level that suits other listeners.

Q: How can the docking station be connected to a TV?

A: The easiest way is to connect the audio cable to the TV’s headphone output and additionally to the docking station’s audio input. As this may mute the TV’s speakers, there are other options to pick up the TV’s signal:

Q: How can the volume of the Roger microphone be adjusted?

Q: Can a Roger microphone be used to listen to GPS navigation?

Q: How can my customer use my Roger microphone to talk on the phone?

A: Roger Pen can be directly paired with any Bluetooth® enabled phone.

There are other options available for phones without Bluetooth. Please check the Guidebook for further details.

Q: Is it possible to listen to more than one Roger microphone at once?

A:Yes, up to 10 microphones can be connected to a Roger network.

The device on which ‘Connect’ is pressed to add additional microphones will become the controller of the network and needs to be available to use other microphones.

Only one microphone will be active at a time, meaning the first speaker will be heard. If another speaker talks at the same time, he/she will not be heard until the initial speaker stops speaking.

Q: What is Roger?

A: Roger is the new digital standard that bridges the understanding gap, in noise and over distance, by wirelessly transmitting the speaker’s voice directly to the listener.

Q: Who can benefit from Roger?

A: People with hearing loss who struggle to hear and understand speech in challenging listening situations, such as in loud noise and over distance, even when wearing hearing aids or cochlear implants.

Q: Why is it called Roger?

A: The name Roger comes from the aviation/radio world, where it means “message received and understood.”

A: Some digital hearing aid users feel that because their sound quality has improved and background noise has been reduced, they no longer need the help of a personal wireless microphone system.
However, a Roger system still offers many advantages over digital hearing aids alone. These include reducing the effects of reverberation (echo) and helping to overcome the effects of distance between the speaker and the hearing-impaired listener.

A: Yes, because scientific evidence shows that transmitting speech to both ears brings the greatest benefit. One study proved that speech understanding improved by 40% when two wireless receivers were used instead of one.

Q: At what age should a child start using Roger technology?

A: Wireless microphone technology can play a valuable role in boosting a child’s access to sound from an early age, which is crucial for their speech and language development. Most experts recommend introducing such systems once a child becomes mobile.

Q: What does Roger technology offer?

Q: How is Roger technology different than Bluetooth® technology?

A: Roger is an adaptive digital wireless transmission technology standard developed by Phonak, which runs on the 2.4 GHz band.

While Bluetooth operates on the same frequency band as Roger, it uses a different protocol and is therefore not compatible. It also differs in the following additional ways:

A: No. Roger is a robust digital wireless standard that is immune to such possible causes of interference.

A: A Roger network cannot be affected by Wi-Fi. This means surfing on the internet while using a Roger system does not impact the audio signal at all.
However, Wi-Fi networks are not that robust and the Wi-Fi can temporarily be reduced if a Roger microphone is closer than 1m / 3feet to an 802.11g Wi-Fi access point.

Q: Can my customer use a Roger system on an airplane?

A: Since Roger is a radio system that features both transmitter (microphone) and receiver units, it faces the same in-flight restrictions as cell phone technology. Consequently, it should not be used on a plane.

Q: Can my customer use a Roger system in a hospital?

A: The output power of Roger wireless microphones is very low and falls well within all government-established safety standards.
That said, although you should be able to use a Roger system in a hospital, we recommend you do not use it in an Intensive Care Unit or Operating Theater.

Q: Will a Roger system affect a pacemaker?